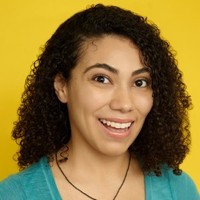 You may have heard her on Toonami on JoJo’s Bizzare Adventure! For Day 20 of #29daysofblackanime I got the oppurtunity to interview voice actor, Tiana Camacho!

How did you get into anime?

TC: I have always been a massive weeb. I actually graduated from college with a Madoka Magica themed graduation cap. It’s Kyubey and all frilly with ribbons. It says “GRADUATION IS SUFFERING” in gold letters.

I’m also into the rose of Versailles and I absolutely love retro anime.

What made you decide to work in the industry? What’s the best part of your job?

TC: I was always a fan of anime. I was a part of my high school anime club as well. And I enjoyed watching dubs all the time and really wanted to be a part of that. I loved acting and I went to school to become an Actor so I figured since I had the training I should try to dub some anime. I was booking video games out of my dorm at college and that’s how I got started. So I graduated with a career as a voice Actor already.

What do you foresee in the future with anime and black community? For example the fandom, storylines, animators, working in the industry etc.

TC: Cannon busters gives me a lot of hope. A lot of Japanese companies are getting the message that diversity is not only profitable but extremely important and when you have a corporation what’s most important to them is their bottom line. I’m from Brooklyn. I can honestly say that there is no demographic of people in the entire world that love anime more then black and Brown people in the ghetto. I grew up in the projects. All people did was watch Dragonball Z and Bleach and Inuyasha. Anime is hood culture. It’s not even nerdy. It’s considered normal.

To be fair I didn’t really grow up there. I spent the 1st 6 years of my life in the New York City housing authority projects in Coney Island. We then moved to a private house about a mile and a 1/2 away. But I had family members that still lived there and every time I was over there we would watch Toonami. Like a family.

What about voice actors?

TC: I don’t really know what the future of working in this industry will be for me. I will say however that more black stories are being told. And I think it’s also because the fandom is becoming more and more uplifted within the community. Especially as a response to racism on social media.

I will say though that us voice actors of color in this industry love and support all of you and your love of the media that we are so privileged to be a part of. To be perfectly honest I really feel like all of us started as fans. I see a lot of myself in some of you and I’m sure many of us feel the same way.

What anime are you currently watching this season?

TC: Jojo Golden Wind. I was not actually a fan of Jojo until I did voice over for it. Then I started watching it to catch my episodes on Toonami because being on that block meant so much to me.

AND THEN I GOT INTO JOJO.

People have tried to get me into that show for years. It’s actually hilarious that I’ve tried to avoid it for so long. It’s kind of like that episode of spongebob where you find out that squidward is into krabby patties.